you can find all newsletters here

One of the documents of the Second Vatican Council, Lumen Gentium (“Light of the Nations”), describes the family as the ‘domestic Church’ because it is the first place where young, baptized Christians learn about their faith. During this time when families will be spending more time in the home following the school closures it presents more opportunities for our domestic Churches to be nurtured.

Isolated but not alone, resources, prayers and links for faith at home:

Suddenly, I lost count! In the distance, I could see a bright light – like a star- moving towards me. It couldn’t be a star, could it? It was too large! As it came closer, I discovered it wasn’t a star at all… it was an angel!

I ran to fetch the others, who were huddling round the fire, as the angel shouted, “Don’t be frightened,” as I covered my face with my hands. He continued, “I am here with good news for you, and for everyone in the world! “Tonight in Bethlehem, The Lord, The Messiah will be born! You will know it is him because he is lying in a manger, in a stable, fast asleep!”

Then other angels started to appear in the starry sky and began to sing,. “Glory to God in the highest , and on earth, goodwill and peace to men!”

I dashed to tell the others all that had just happened and told them,

“We must go to Bethlehem straight away!,” We took a lamb to give to the newborn king and we set off down the hill.

When we reached Bethlehem, it wasn’t hard to find the baby Jesus because the angel had told me he would be in a stable. As the angel had said, the baby lay in a manger in a stable surrounded by animals. His mother, Mary, welcomed us to stay in the stable for as long as we liked because he was not just their baby!

A few days after, the shepherds and I arrived. Three wise men also came to meet the new king!

They told us, “We have come from far away, from the east of Bethlehem.”

We have spent our lives studying stars and planets. We saw a great new star! Such a star could mean only one thing: a new king had been born, a great king.

We all agreed we must find him and worship him! The star shone, guiding us on our journey. When we arrived in Jerusalem, we thought we didn’t need the star anymore because the king would be in the palace!

We asked king Herod if we could see the newborn king and he looked horrified!” He spluttered, “A new king, here, in Jerusalem! How could this be? How do I not know about it? I AM KING HERE!”

He sent for his guards and ordered, “Bring me this king, so I can worship him too.” However, in his head he was plotting Jesus’ murder!

“We, as wise men, decided we must not go back there for the safety of the baby king. Instead, we kept following the star till we found you in the stable!”

I asked how they knew to follow the star and the tallest of the wise men replied, “ It is not every day you see a bright new star!”

The men then continued to give their gifts to Mary and Joseph – one gave gold for a king; the second, frankincense for someone more than human, and myrrh for a man who would die. I was confused by these gifts but I didn’t ask anymore questions!

Please see below a range of health, wellbeing, financial and family support links:

Warwickshire School Health & Wellbeing Service
In a year of uncertainty and upheaval, it’s no surprise that many families are facing difficulties in their daily lives. Children and young people may be feeling anxious, frustrated, sad, stressed and many other difficult emotions, which may contribute to wider issues such as sleep disorders, substance misuse and challenging behaviour.

While it’s not unusual to be dealing with these problems, that doesn’t mean they can be ignored if they are impacting on your or your child’s wellbeing, or that families have to go through this alone; help is here when you need it. https://www.compass-uk.org/news/parents/help-at-christmas/

The team are planning a comprehensive range of free parenting programmes for delivery during 2021 which will be advertised on the Warwickshire website and can be booked through Eventbrite:
https://www.warwickshire.gov.uk/children-families/parenting-courses

Facing Hardship
For information about wider support from the council and other services, go to:  www.warwickshire.gov.uk/facinghardship

The leaflet about help with food access and money management is available at:  www.warwickshire.gov.uk/winterhardship

Just a quick reminder that with the easing of the second lockdown, public Masses have now resumed. In our parish masses are:

All are welcome
https://www.stwulstan-southam.co.uk/
(Please remember that face coverings must be worn and social distancing measures will apply)

Please find below a letter from the Chair of Governors, updating parents and carers on the work of the Governors over the past twelve months.

Letter from Chair of GovernorsDownload

The Children’s Liturgy at our Church normally takes place alongside Mass on Sunday mornings but of course this has not been happening in recent weeks due to the pandemic.   Our Church is now proposing to hold the Children’s Liturgy on-line using Zoom. The Liturgy is a time of worship and fun for children of primary school age and usually involves a bible reading, songs, prayers and handicraft activities.  The first on-line Liturgy will take place on Sunday 14th June at 10.15 – 10.45.

All children will be most welcome to attend  even if you do not attend Church. If you would like your child to take part please e mail Father Arul (presbytery@stwulstan-southam.co.uk) as soon as possible and further details including log in instructions will be sent to you

As a school we sympathise with you during this uncertain and challenging time. The unknown and constant changes can cause anxiety to rise and mental health to decline. We have received some resources to support you all during this period. Below are links to some visual resources to help young children, or children with SEND, to prepare for the return to school, and to reflect on their lockdown experience.

There is a flier below with contact details for any children to call regarding their mental health. It is a 24 hour 7 days a week telephone advice helpline run by qualified mental health clinicians to be there for you to contact when you need.

There is a Council helpline for any parents and carers who have any concerns or queries. You can contact the Parental helpline on 01926 412021, from 9am to 5pm, or check the Council’s website for further information.

The parent and carer webpage can be found by clicking here

Take care of yourselves,

We are excited to be able to invite you to the opening of our new Peace Garden. This beautiful space has been created on the site of the old nursery building with a generous donation from the Sisters of the Poor Child Jesus, and support from FOSM. It grew out of designs made by the children themselves and is a space where they will be able to enjoy peace and quiet, contemplation and nature. There will be opportunities for gardening and outdoor activities.

At 2.30pm after an afternoon of gardening related activities the children and staff will join our Town Mayor, Councillor Mike Brooks, Father Arul, Sister Sharon and Sister Mary Paul, Parishoners, special guests and parents for the grand opening of the garden.

A cake sale and afternoon tea will the take place in the school hall following the opening. We hope that lots of people will come along and support this event, it should be a lovely occasion.

In addition to the financial contributions from the Sisters and FOSM, we also want to say thank you to Terry and Jackie Grey for donating a fabulous bench, and DobbiesGarden Centre for donating some wonderful trees. 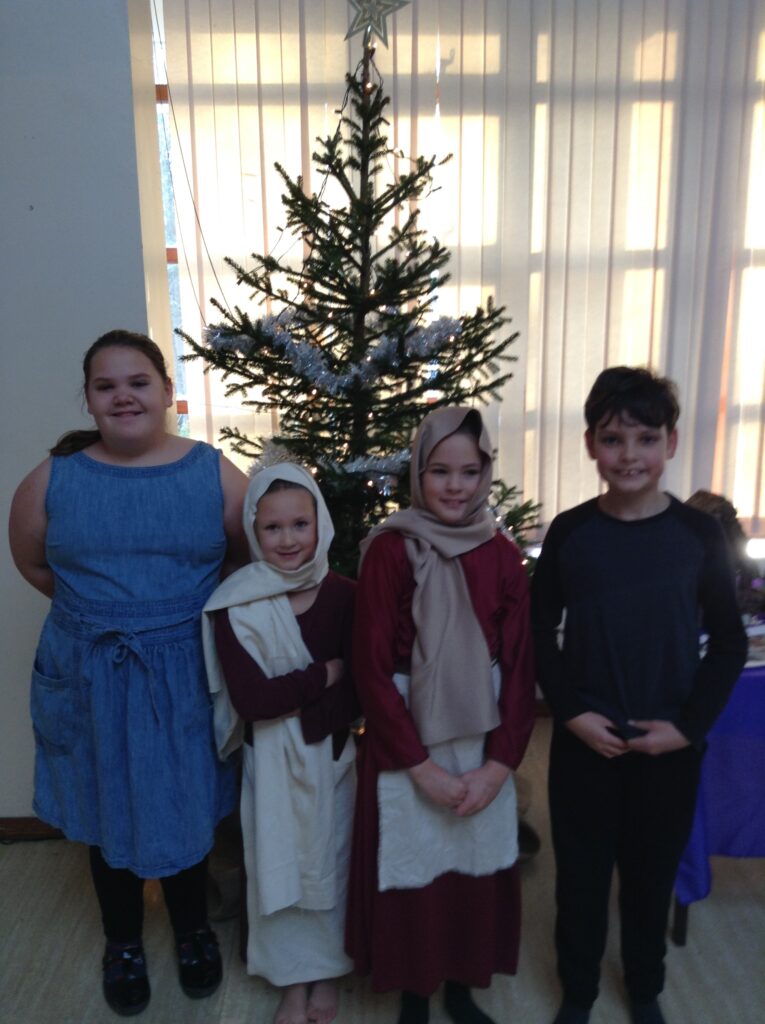 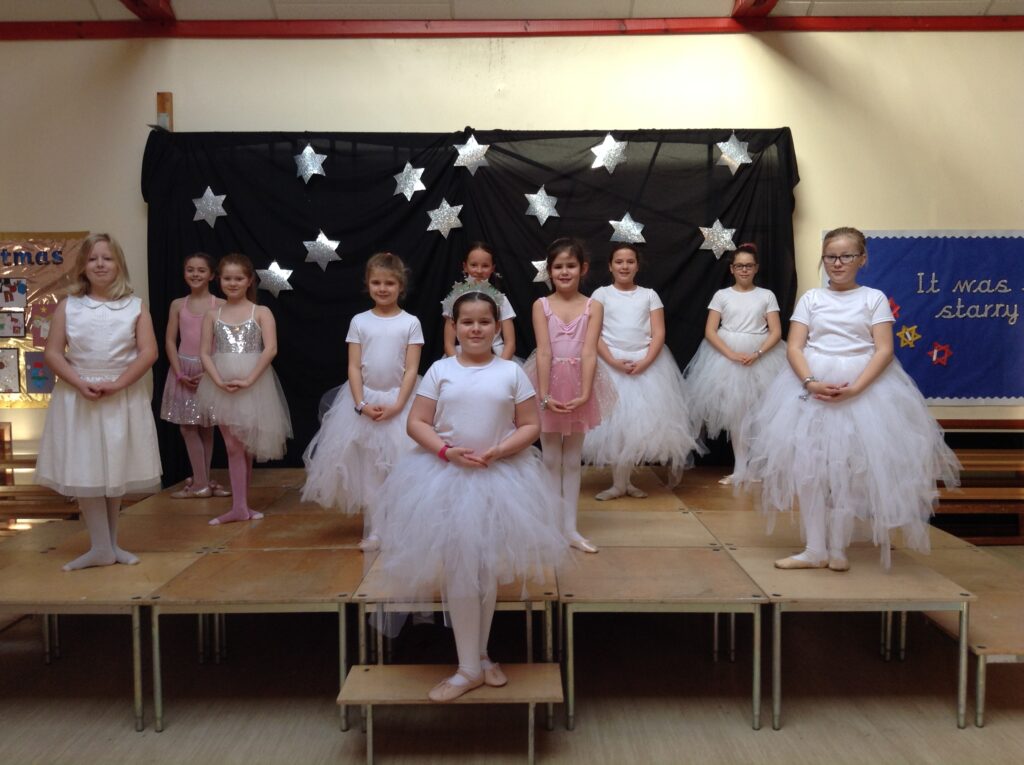 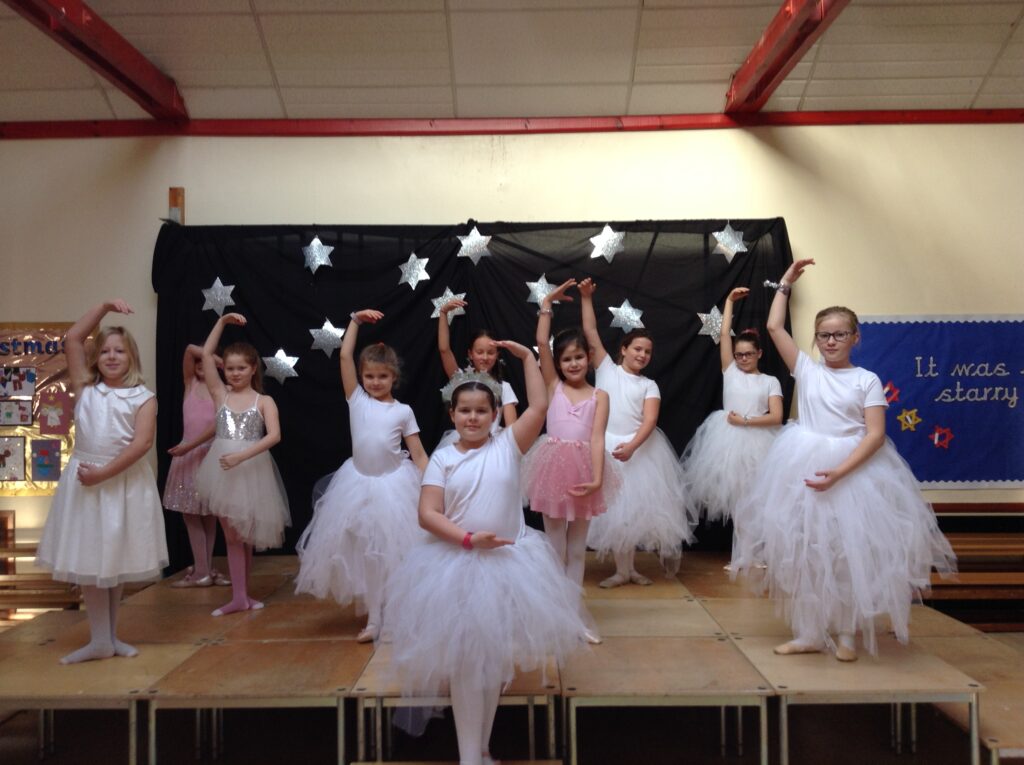 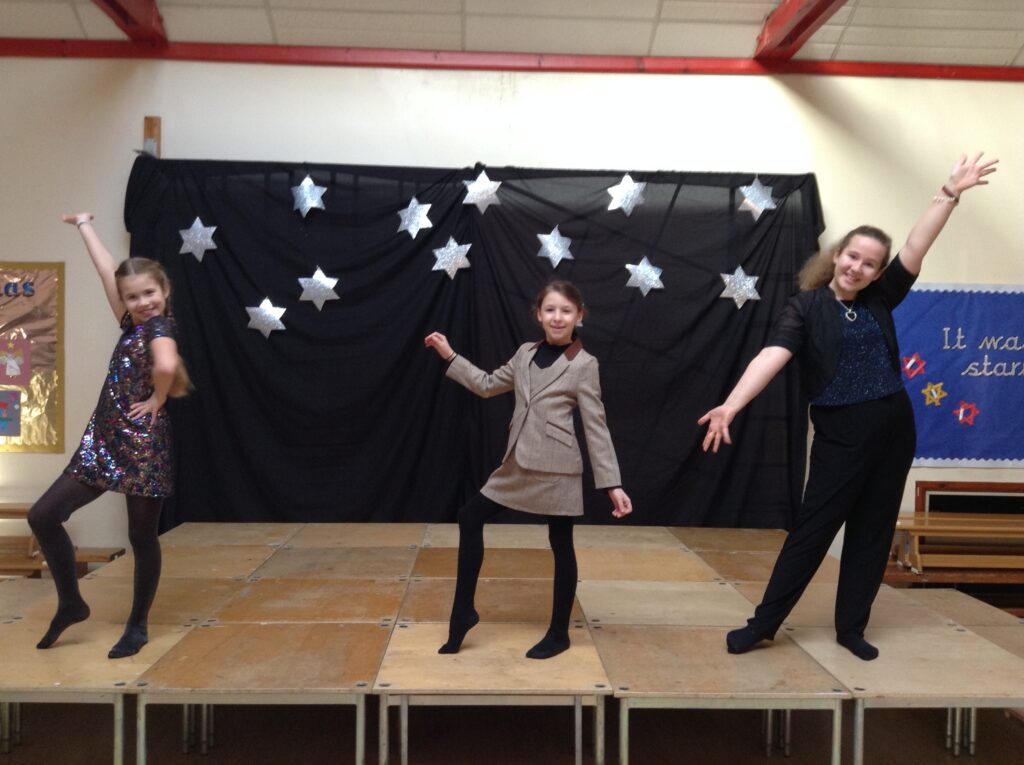 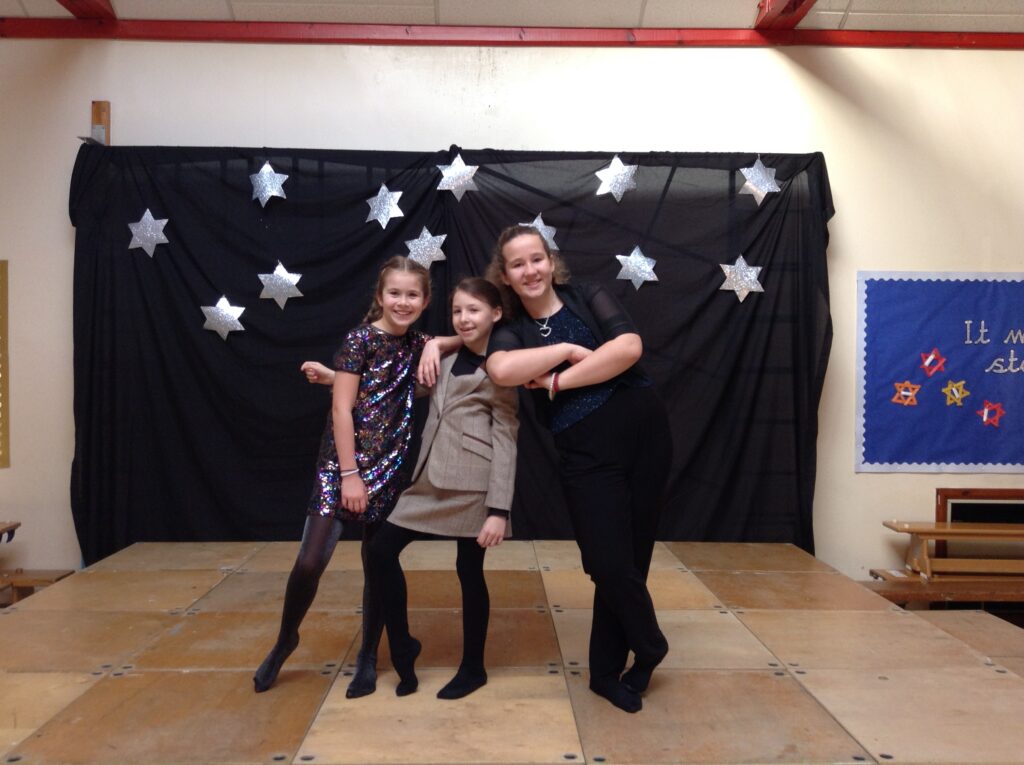 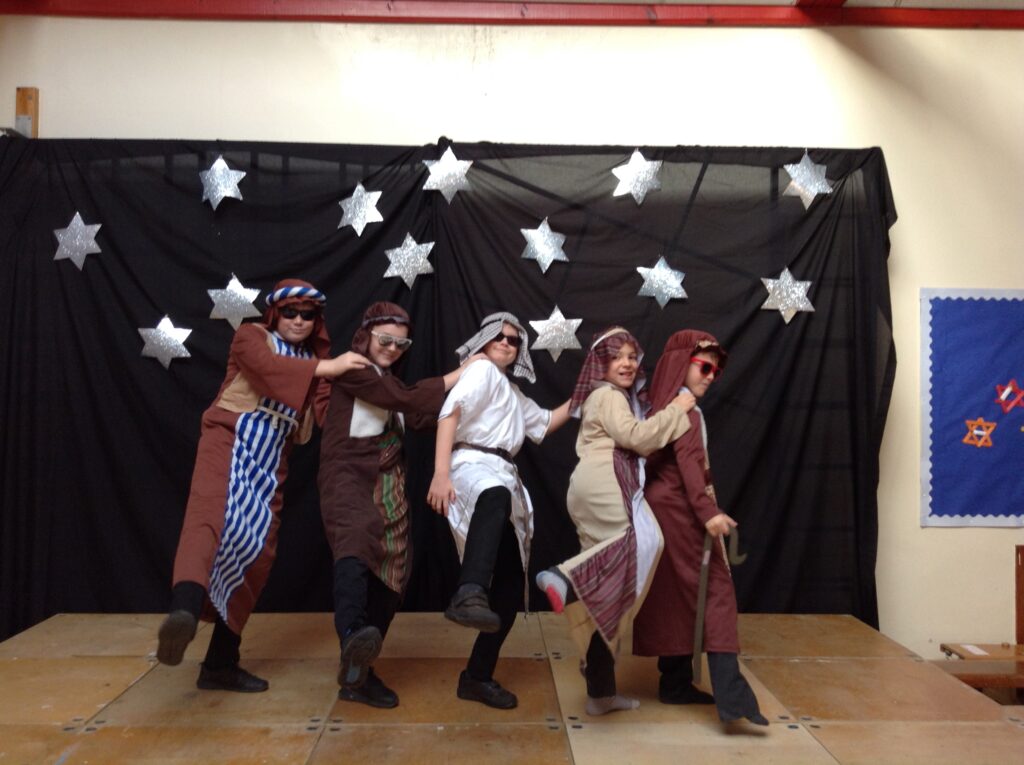 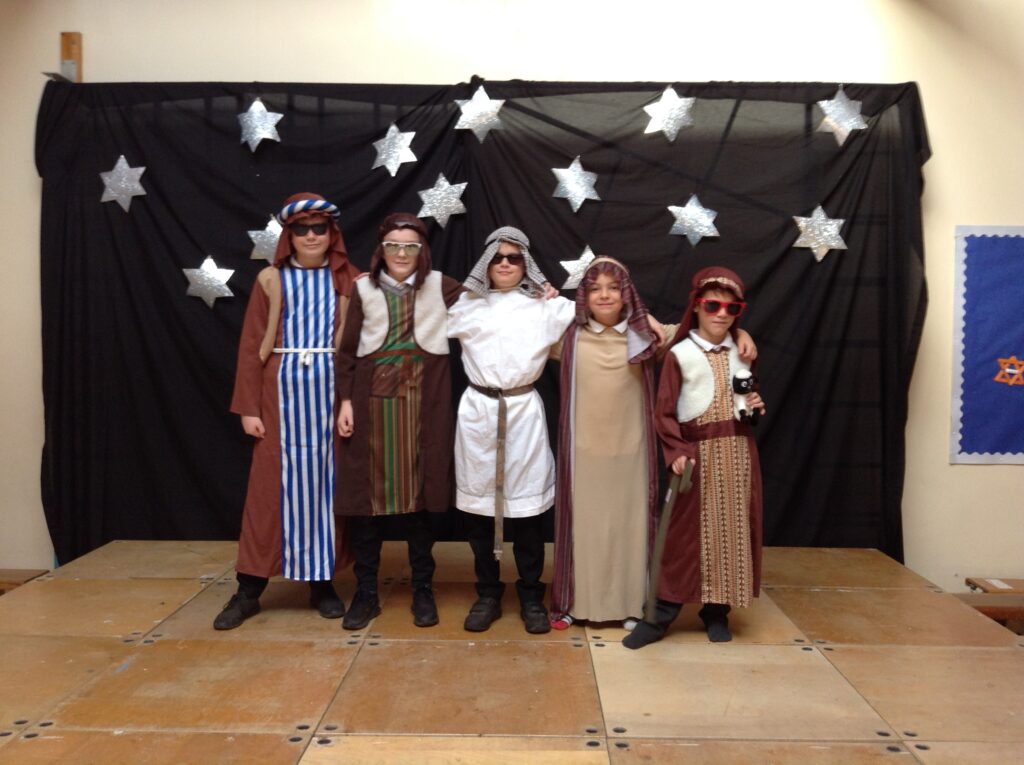 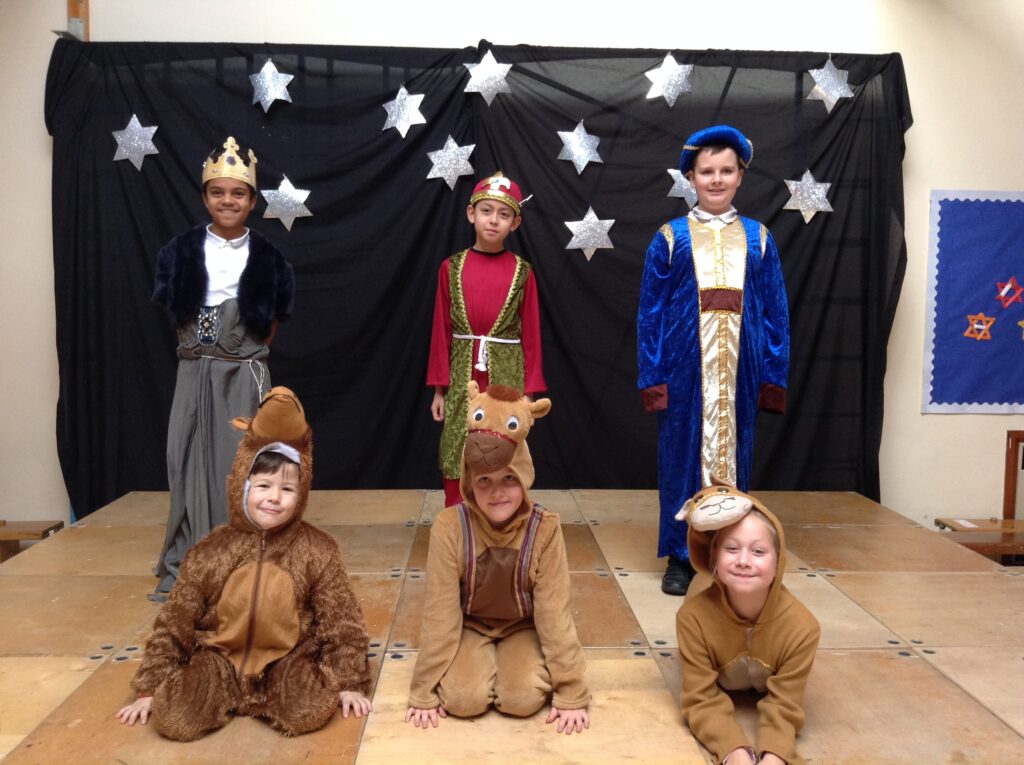 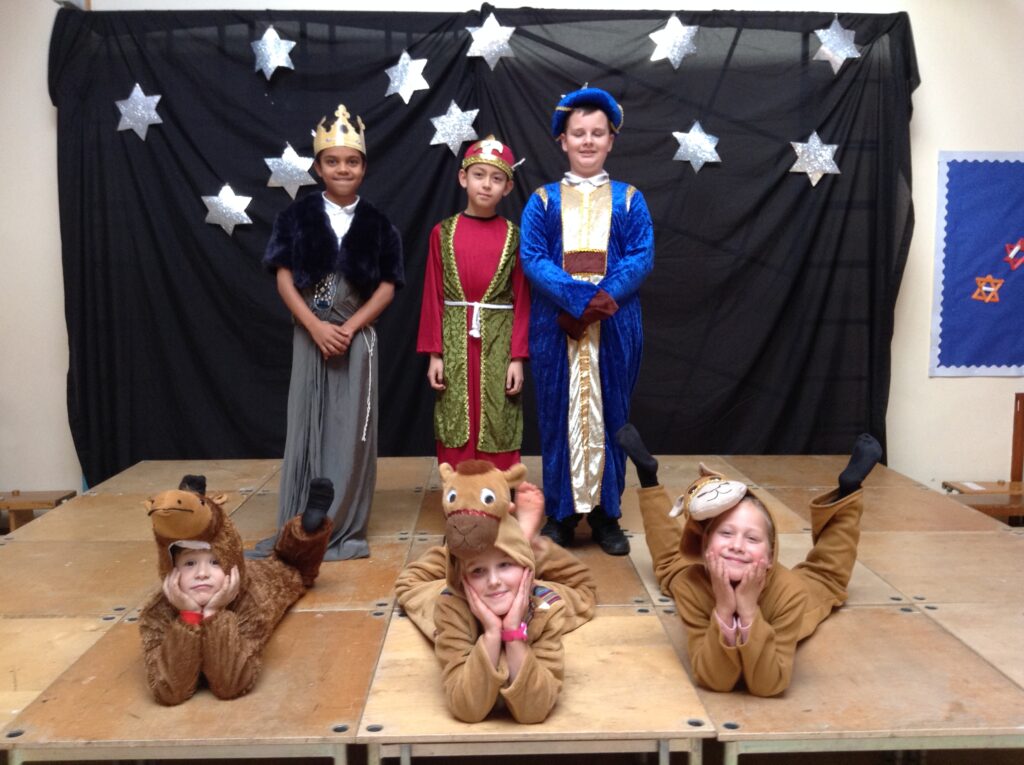 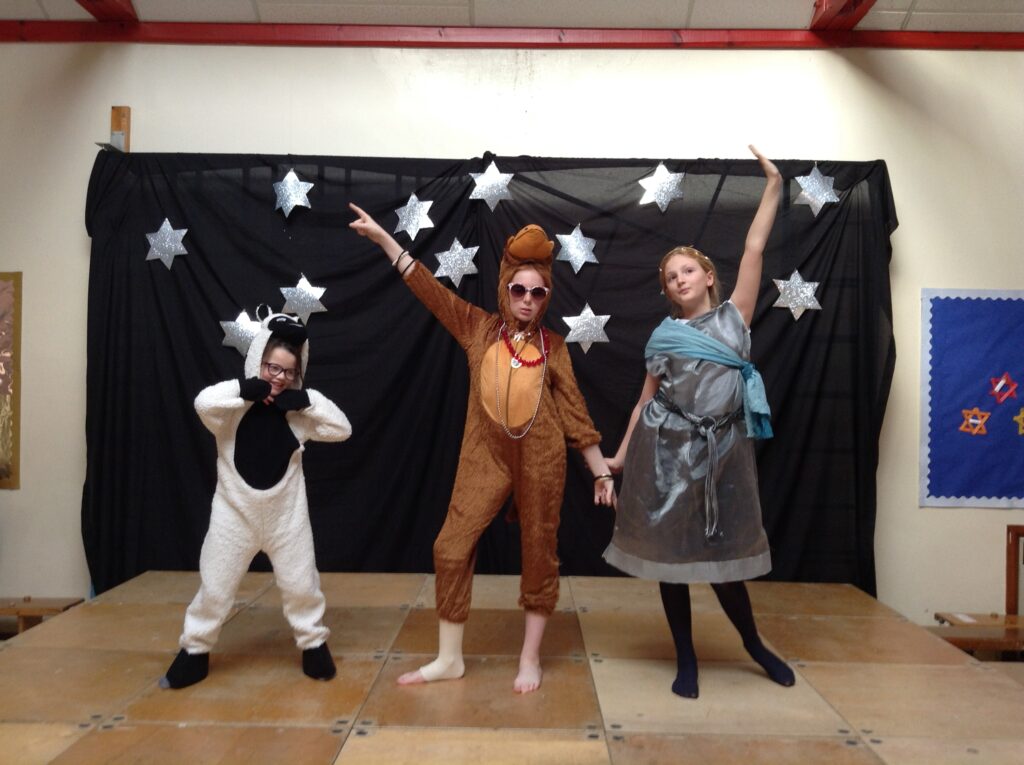 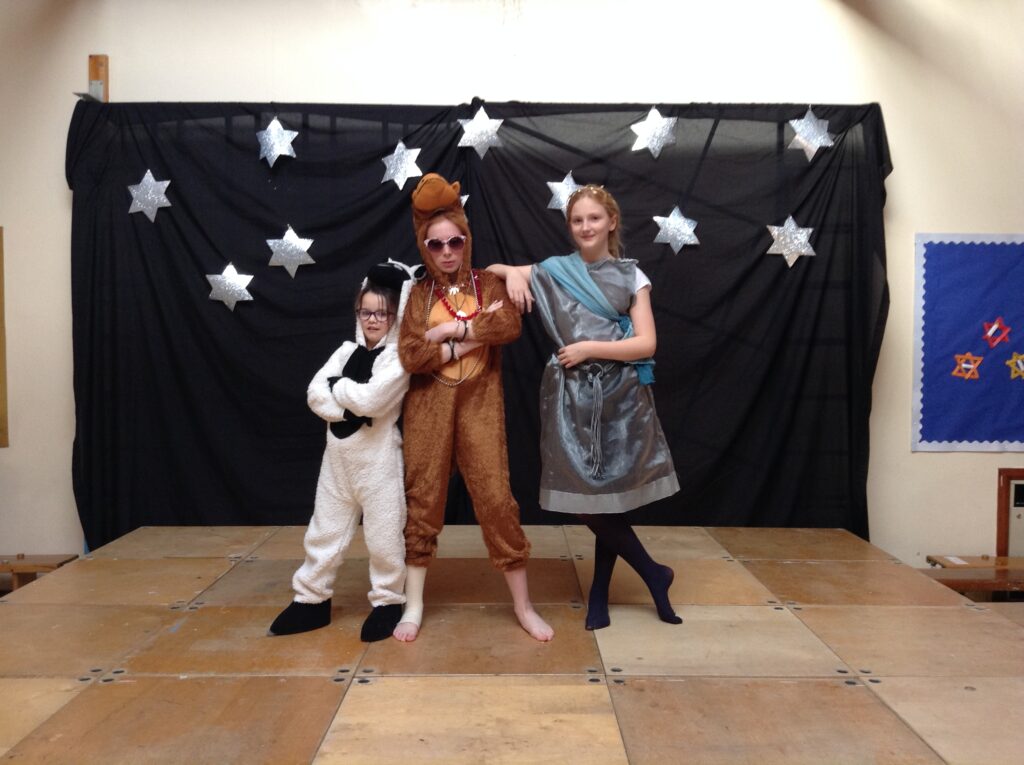 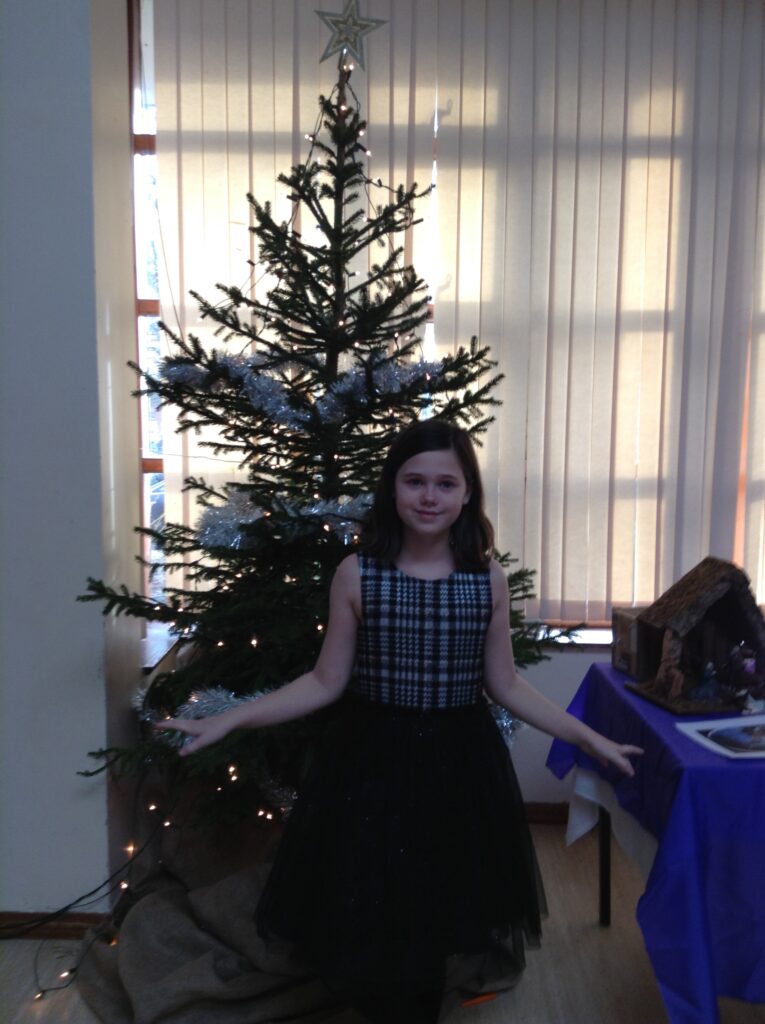 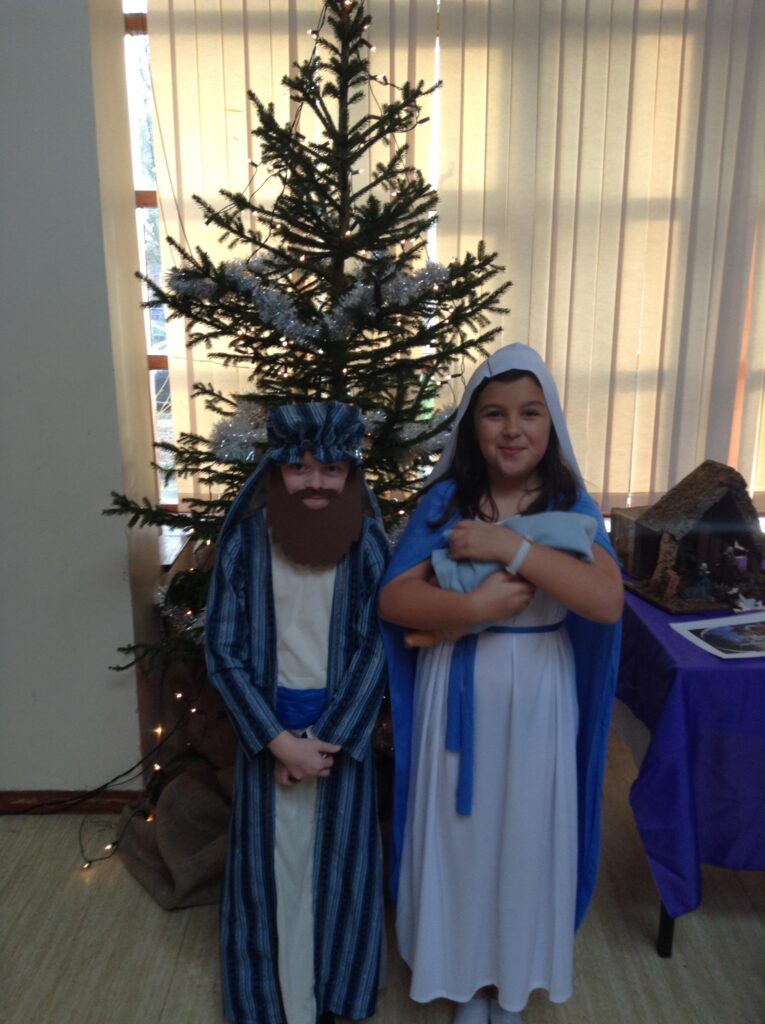 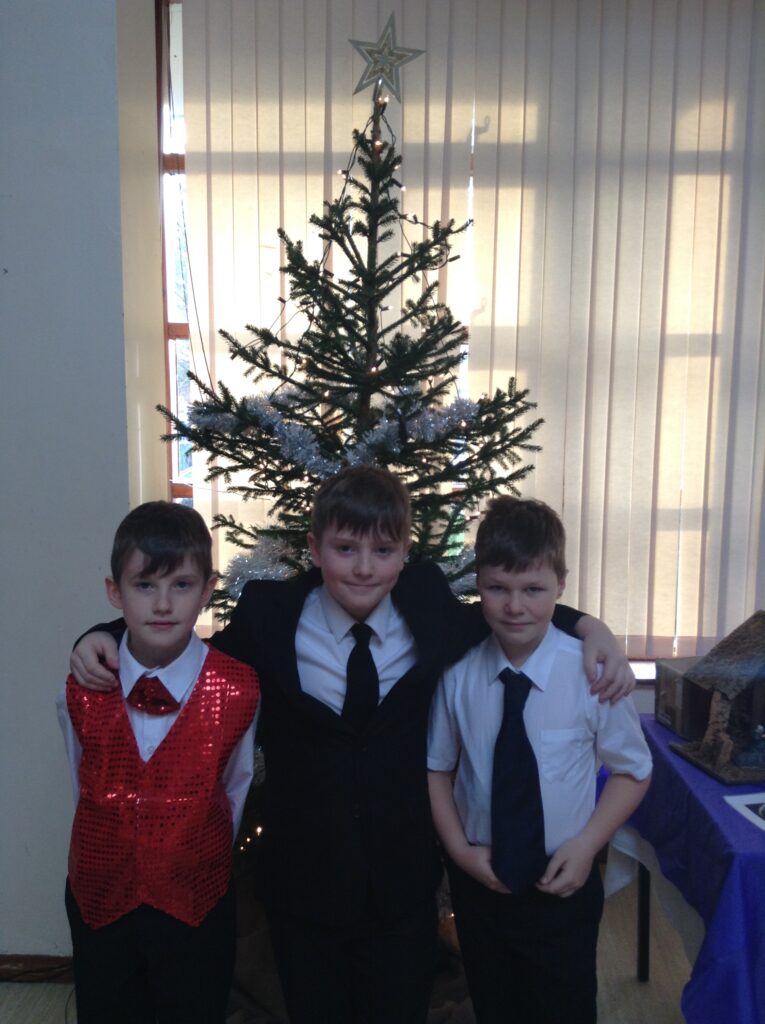 The judges have gathered their scorecards, dancers are waiting in the wings
and the audience is assembled for Lights, Camel Action 2! The Sequin.

A star-studded line-up of nativity celebrities – our talented Key Stage 2
children – gathered in the stable once again to celebrate the amazing events of
that first Christmas, retelling the incredible story of Jesus’ birth in a
celebration full of pizzazz and razzmatazz! They performed a fabulous range of
dance styles from gospel to hustle and ceilidh to conga. Bravo to our amazing
children!

The school provides a nurturing environment, where the needs of the child are put first

Leaders and teachers have high expectations of what pupils can achieve and provide opportunities to enable pupils to meet them.

Pupils take pride in their work, present it well and try hard. Their behaviour is exemplary. Pupils are polite and confident and their enthusiasm for learning shines out.

The school’s values of love, patience, generosity, kindness and mutual respect are embedded across the school.

A comprehensive cycle of school improvement is securely embedded across the school.

Leaders and governors set high standards and check the quality of the school’s work against these rigorously.

Governors are highly ambitious for the school. They share your determination to provide pupils with the best possible education.

We use cookies to ensure that we give you the best experience on our website. If you continue to use this site we will assume that you are ok with this. Ok